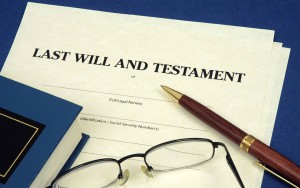 One of the most important things we can do in life is to ensure that we have a valid Will in place. This may be an uncomfortable process for some, as one has to contemplate one’s own death and it is possibly for this reason that many people put off or delay actually having a proper Will in place.

But having a valid and current Will is a most responsible thing to do, as it eases the burden of your loved ones who are having to deal with their own grief whilst at the same time, having to make all the normal arrangements that follow the loss of a loved family member.

Some people draw up their own Will using Will kits that are available from any number of stationers. Wills may appear to be quite simple and this approach may work in many instances. However, the risk is that a simple mistake could cause the entire Will to be void or for a gift to a beneficiary to fail.

The wording of a Will has to be precise to ensure it is the one and only valid Will that clearly sets out your instructions. However, if the wording is too precise so as to be restrictive, it can lead to significant difficulties in obtaining a grant of probate, which is the authority of the executor to administer the estate.

In a recent case in NSW, the testator included a provision in his Will for ‘‘my unknown daughter in Victoria’’. Apparently, this was a daughter from a prior relationship, whom the deceased had never met. This placed an enormous burden on the surviving daughter who sought the direction of the NSW Supreme Court regarding the lawful distribution of the estate. The court made an open-ended ruling that, while the estate could be distributed, at any time, the unknown daughter or their descendants, could at any time claim their share of the estate. This left the surviving daughter in a quandary as to how she could or could not use the proceeds from the estate belonging to her unknown sibling, if she ever existed.

Obtaining correct advice regarding the contents of the Will is vitally important. In New South Wales, the Courts have shown a growing willingness to accept claims from family members who received no benefits under a Will.

In a recent case, a daughter who had been estranged from her mother for 20 years was able to succeed in her claim for family provision in her mother’s Will. It is the Court’s view, that a testator has a responsibility to leave provision for their immediate dependents and, where this has not been the case the Courts have made appropriate family provision orders.

In another instance, in a matter that went to the High Court, a beneficiary to a Will was also one of the witnesses. In this instance, the rule is that a beneficiary loses any entitlement to a gift in a Will if they are also a witness to the signing of that Will. The Court upheld this ruling and in this case, the beneficiary lost the gift which was the family home.

If there is no Will

If one does not leave a Will (i.e. dies intestate), the law has a number of default rules to apply to the distribution of your estate. This does not always mean your estate will be distributed in accordance with your wishes. For example, where there has been more than one domestic partner or de facto relationship, the default rule is that where there is no Court Order or written agreement, the spouses share in the statutory legacy (derived via a complex formula), the deceased’s personal effects and the remainder of the estate. If the deceased had children, the spouses only share one half of the remainder of the estate, while the other half goes to the children in equal shares.

Factors that can invalidate a Will

There are also a number of other key factors to bear in mind that can invalidate a Will.

Firstly, marriage will invalidate a Will and in the event of intestacy, the surviving spouse will be entitled to a share in the estate according to the default rules. However, if the Will is made in ‘contemplation of marriage’, it will remain valid after the marriage.

Secondly, unless there is contrary intention expressed in the Will, divorce will immediately cancel any benefit the other party may previously have enjoyed. However, this does not apply during the mandatory 12-month separation period prior to a divorce.

During the separation period, if the other party is still named in the Will, they will still be entitled to that benefit. So it is an important consideration that in the event of a separation, the Will be amended to reflect revised testamentary intentions. The same recommendation applies where the matrimonial home is subject to a joint tenancy, in which case, the surviving spouse inherits the deceased spouse’s share of the home.

On the other hand, a properly drafted Will can bring great peace of mind to the Testator and their family. In the case of large and complex estates, a well-drafted Will can make adequate protection of assets accumulated over a lifetime of careful investment. A well-drafted Will can also bring the confidence that close family are adequately cared for and testamentary wishes be carried out according to the Will.

IHS Law (“in His service”) is a Christian law firm established to bring Christ to the centre of its principal’s practice of law and is committed to honouring the many and various duties and obligations of a solicitor.